Security officer work schedules are a difficult task at best. Employees have got to be dispatched to multiple sites with multiple contract requirements. Security patrols within sites make it even more complicated. Client A is 168 hours per week (Hpw) on a regular schedule. Client B starts at 108 hpw but guards leave when the warehouse shuts down. That could be earlier than scheduled or later than expected. The all time monster was a client who contracted for 85 officers each day to man posts and perform security patrols at a maritime facility. An additional problem was that the client wanted guards to rotate posts every two hours! These are all actual examples of the headaches faced by operations managers.

There was a time when these tasks were done manually. The operations manager at the maritime facility had to carry around a folder full of shift schedules for each security guard. There was no time for the other tasks needed to run such a large guard force. It would be safe to say that she had a permanent scowl on her face.

The appearance of scheduling software has made tasks like these a lot easier. Changes in schedules or last minute replacements can be made simply and quickly. The shrinking size of hard ware has had an impact as well. What used to take a desktop machine working off a company server can now be done on a tablet PC with a Wi-Fi connection. The technology has been growing by leaps and bounds. The nice thing is that economy of scale factors into the increased use the new hardware and software. Increased use has resulted in decreased costs associated with using new technology. Industries like security, which traditionally operates on low profit margins, can afford security guard management software they so dearly need to stay competitive.

The problem today is to find scheduling software that is simple to use. Some of the early scheduling programs were extremely difficult to use. One program (circa 2005) required managers to attend a two-day training program. New programs like Snap Schedule have gotten much more user friendly.

That doesn’t mean that every program out there is right for your company’s security guard schedule. You have to consider two factors: The level at which input will take place; and, the educational level of the user. A single user system residing on an operations manager’s laptop will be easier to use than a multi-user platform located on a company server. Does a field supervisor need as much capability/system access as a branch manager? Can an employee with a GED handle the requirements of a system designed by the payroll manager for security officer work schedules? The answers are obvious. When you shop for scheduling software follow the old KISS principle. Buy the simplest, user friendly design you can find for the tasks you need done and the employees who will be doing them. 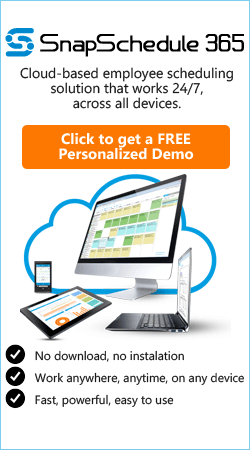